Another Reason To Love Quinoa

I'm all up in this "eating sustainably" movement right now, and I'm far from the only one - this week, NPR covered the impact that the increasing popularity of the protein-packed grain quinoa is having on farmers in Bolivia.

Easy thing you can do to save the world through food - eat ethnic foods.  Granted, they aren't all grown organically (which effects their demand on the environment) and some of them are shipped long distances (hello, non-renewable oil resources).  But diversifying your diet does one enormously positive thing: increases the demand for variety in food markets, which increases overall sustainability, and adds non-animal-based sources of nutrients into our meals. Most of the rest of the world lives primarily on plant proteins, and feeding growing populations requires the most efficient use of arable land.  Another bonus?  You might lose some weight.

A key appeal of sustainable eating (and by extension, farming) is the goal of having viable sources of food that will survive a cataclysmic event, or the slow-crawl of environmental destruction due to overpopulation.  Biblical flooding in the Southern hemisphere in January just serves as a reminder that environmental disaster can affect all aspects of our lives.  Part of sustainability is variety, both in final product and in the environmental heartiness of our crops.

Right now, much farming in the United States is done on a very, very small array of foods - chicken, corn, potatoes, and even then only one or two species of each.  Along comes one minor disaster (say, a drought in one part of the country, a bird flu outbreak that targets genetically identical lab grown chicks, a crop mold that devastates corn holdings...) and we're suddenly sans a large portion of our edibles.  Our livestock is often neutered, unable to reproduce itself and reliant upon lab techs to keep breeds alive.  This sounds not only ridiculous when you break it down, but also dangerous.  Chickens who cannot produce more chickens?  NOT sustainable.  An entire country that exists on only one or two crops?  NOT sustainable.

Enter quinoa, the Bolivian farmer and your opportunity to change the world for the better while adding variety to your dinner plate. 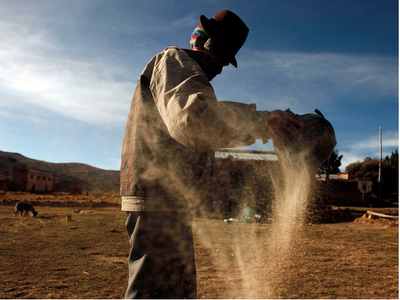 Quinoa is an incredibly protein dense grain (like rice but richer and nuttier) that has long been a favorite of both vegetarians and people in other countries who do not have access to cheap animal products like we do in the US.  In these hard times, Americans are seeking more cost-effective grocery options.  Quinoa grows in land that is not optimal for growing other crops - like the high plains of Bolivia, where it is has been a dietary staple since the Incan Empire.  It can be used in any recipe that calls for rice and keeps you full longer because of its protein content.

Quinoa's American popularity is generating much-needed income for South American farmers, while diversifying our diets and expanding our culinary repertoires in the United Sites - all good things.  Unfortunately, due to market economics, the popularity of quinoa is driving the price higher in Boliva and pricing it out of affordability for the people who rely on it for a food source.  There are also concerns about mass production increasing environmental damage, as there is for any factory-farmed crop.
As with any option, there is no silver bullet to correct all wrongs. Still, if American shoppers and the Bolivian government can keep an eye on the environmental interests, adding quinoa to your diet can help the livelihoods of some of our neighbors to the South, add variety and health to your own diet, and increase global food sustainability.  There are small, daily ways we can effect the lives of others, the health of the planet, and our own fitness. This is just one of them.