Could Cigarettes Be Healthy? No, But Nicotine May Be

Written by Annalise May
Posted October 30, 2018

When you think of making healthy changes to your life, typically you imagine giving up bad habits such as drinking soda, eating junk food, and smoking cigarettes.

Although there was a time when smoking cigarettes was as normal as drinking coffee, if you’ve been around for the last 60 years, there’s absolutely no chance that you’ve heard cigarettes are good for your health.

The landmark report, Smoking and Health, released in 1964 by the Surgeon General of the Public Health Service, kicked off the development of anti-smoking groups as well as political and advertising movements such as “Kick the Habit” and “Smoking Kills.”

The scariest health consequence of smoking cigarettes was its link to cancer. As far back as the 1930s, researchers had discovered a link between cigarette smoking and lung cancer.2

Today, after 50 years of research, the carcinogenic effects of cigarettes are undeniable.

The most recent Surgeon General’s report on the health consequences of smoking reveal that, since 1965, there have been more than 6 million deaths as a result of smoking-related cancers.3

However, nicotine, the stimulant present in tobacco, has been the subject of recent exciting research in the medical field.

Without the carcinogens and toxins in cigarettes, nicotine may be an effective treatment for Alzheimer’s disease, Parkinson’s disease, and even mood disorders.

Let’s take a look at everything you wanted to know about nicotine and its potential health benefits.

What Is Nicotine, and How Is it Used? 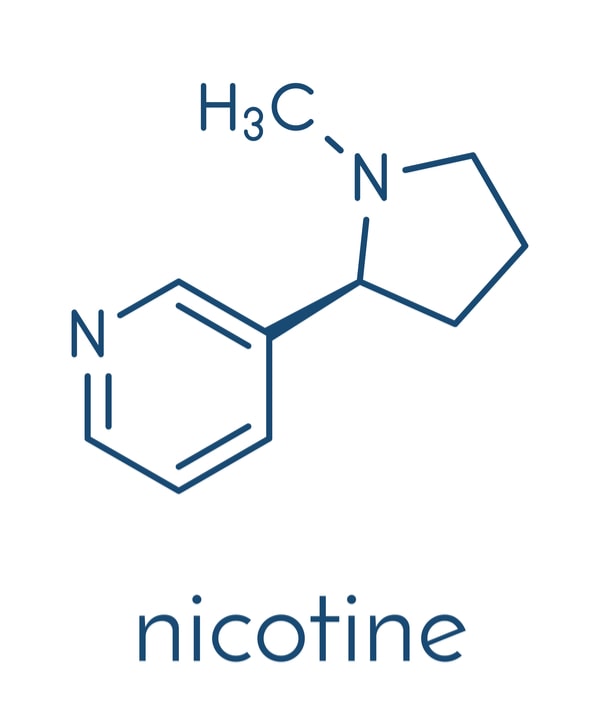 Nicotine is a powerful stimulant found in the nightshade plant family, which also includes eggplant, potatoes, and tomatoes.

Nicotine is most famous for its concentration in the tobacco plant. It is about 0.6–3.0% of the dry weight of tobacco.4

According to the American Heart Association, tobacco is a highly addictive substance and is considered at least as difficult to give up as heroin. However, more research is needed about the actual addictive strength of nicotine in the absence of the tobacco plant.

The most common form of nicotine consumption is through cigarette smoking. Unfortunately, although our society has come a long way in realizing the dangers of cigarette smoking, more than 40 million people continue to smoke. Tobacco use is responsible for one-third of all cancer deaths in the United States.5

What Are the Effects of Nicotine?

Nicotine on its own is not cancer-causing or excessively harmful. However, it does expose the public to the wide-reaching harmful effects of tobacco use and dependency.

Nicotine acts as both a sedative and a stimulant. It has a wide range of effects throughout the body. In its pure form, nicotine is thought to have valuable pharmaceutical potential.

When you inhale tobacco smoke, nicotine quickly enters the bloodstream and reaches the brain in about 8 to 20 seconds.6 It is processed in the liver, and half of the nicotine is gone within two hours of consumption.

The first feeling a smoker may experience is a surge of adrenaline. Nicotine simulates the adrenal glands, which increases heart rate, blood pressure, and breathing.

Then a pleasurable feeling floods over the user, similar to the effects of heroin or cocaine. The intensity of this experience depends on the amount of nicotine ingested. This is because nicotine causes the neurotransmitter dopamine to be released in the pleasure and motivation centers of the brain.

The stimulant effects of nicotine are similar to those of caffeine. Users may experience increased alertness, concentration, and arousal. This is due to nicotine’s effect on the neurotransmitters acetylcholine and norepinephrine, which create a sensation of wakefulness.

Surprisingly, nicotine also results in higher levels of beta-endorphin, which actually reduces anxiety. This is the reason some smokers feel relaxed instead of hyped up when they get their fix. 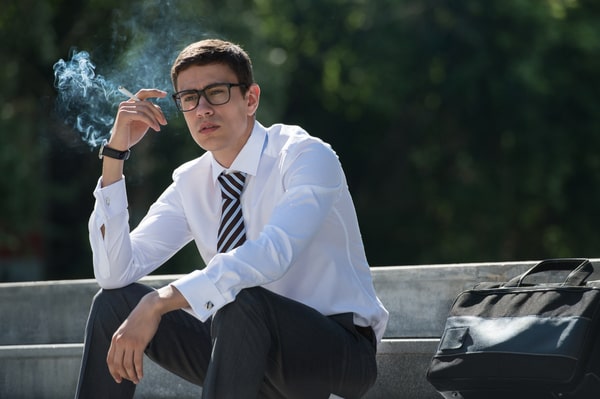 As mentioned above, tobacco is highly addictive. As soon as you start consuming tobacco regularly, you will experience tolerance. In other words, you need to increase your level of nicotine use in order to continue to get the same effects throughout your body. This can happen as quickly as a single day.

For those who do not keep up their tobacco usage, withdrawal symptoms will occur. These include:

Chronic users can expect to experience these symptoms for days, weeks, or even months.

Natural Antibiotics Hiding in Your Kitchen

The over-use of antibiotics is leading to an epidemic of drug-resistant superbugs. Before you even think about using antibiotics, please read our new report about the 10 safe and natural antibiotics you can find right in your own kitchen. These “astringent” foods naturally cleanse your blood without harmful side effects

Become a Clear Health Now reader today and claim your free copy of the “Top Ten Natural Antibiotics Hiding in Your Kitchen.”

Despite nicotine's bad reputation, more and more researchers in the medical field are examining the health benefits of nicotine in its pure form.

Nicotine binds to ion channels and receptors throughout the body in a very specific way. This action causes the release of a number of different neurotransmitters, especially serotonin.

When taken regularly, pure nicotine may benefit the user through: 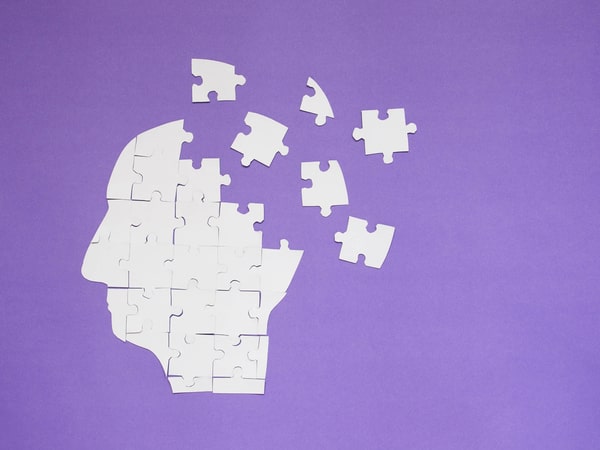 Parkinson’s disease is a progressive neurodegenerative disorder for which there are no proven effective treatments.

It is the second most common neurodegenerative disease after Alzheimer’s disease. Some strains of the condition are genetic, while most other cases are sporadic.

Parkinson’s disease affects cognitive abilities such as short-term memory, attention, sleep, and motor abilities. It can cause tremors, muscle rigidity, and other mobility impairments.

While more research needs to be conducted on the mechanism through which the death of dopaminergic neurons in the brains takes place in those with Parkinson’s disease, oxidative stress is thought to be a major factor in the degeneration of Parkinson’s patients.8

Oxidative stress is defined as the body’s inability to cleanse itself of harmful toxins produced by “free radicals.” The presence of antioxidants balances out the stress caused by free radicals.

Nicotine is understood to stimulate anti-inflammatory pathways in the brain, reducing oxidative stress.

There have been a number of studies documenting the relationship between nicotine use and a lowered risk for Parkinson’s disease. These results suggest that nicotine is neuroprotective.9 Nicotine’s anti-inflammatory properties are one mechanism that could explain these benefits.

Another interesting study found that monkeys suffering from dyskinetic movements — involuntary bodily and facial tics and movements — experienced a 60–70% reduction in symptoms when treated with nicotine-laced water.10

This research reveals the potential for a successful pharmacological treatment for Parkinson’s disease.

Alzheimer’s disease is a progressive disease that causes degeneration in different areas of the brain, leading to memory loss and the deterioration of other important mental functions.

At any given time, there are thought to be over 2 million Americans suffering with Alzheimer’s disease. There is no cure, and current management strategies for the disease may only temporarily reduce symptoms.

However, exciting new research reveals that nicotine may be beneficial in treating cognitive deficits in those with Alzheimer’s disease.

Beyond its neuroprotective effects, nicotine binds to receptors in the brain associated with thinking and memory. It is known that people with Alzheimer’s disease lose some of these receptors, so nicotine may help to preserve them.11 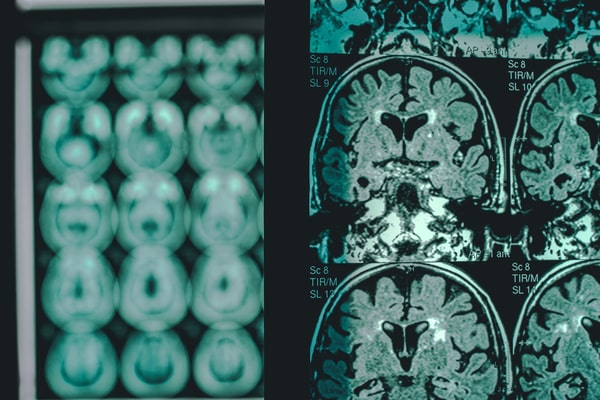 Dr. Paul Newhouse, a researcher in cognitive medicine at Vanderbilt University currently undertaking the largest ever study of the role of nicotine in neurological disorders, explains:

What we and others have shown is that nicotine doesn’t do much for memory and attention in the normal population... but we believe it does do something for those whose cognitive function is already impaired.12

Research in the elderly reveals that nicotine may improve reaction time, learning, and memory.13 Studies using acute nicotine injections show an improvement in attention and cognitive performance in individuals with Alzheimer’s disease.14

A longer-term study researching the effects of chronic nicotine ingestion on Alzheimer’s patients revealed exciting results. In this double-blind, placebo-controlled study, participants wore nicotine patches for 16 hours a day for a four-week period at different doses.

Results revealed a sustained improvement in attentional performance on a cognitive performance test. There was a significant reduction in errors on the test as well as a quicker reaction time.

While smokers often report not being fully awake or able to function until their first cigarette of the day, the effect of nicotine on nonsmokers is on the cusp of medical research.

Nicotine acts on a number of receptors in the brain, most notably dopamine. Dopamine production is associated with memory, attention, and reaction time.

To my knowledge, nicotine is the most reliable cognitive enhancer that we currently have, bizarrely. The cognitive-enhancing effects of nicotine in a normal population are more robust than you get with any other agent.15

Although research has studied the beneficial effects of nicotine, currently, the only FDA-approved use for nicotine patches is for the cessation of tobacco smoking.

While smokers use cigarettes for a number of different reasons, many users report that despite the health risks, smoking relieves their anxiety. Anxiety relief is hypothesized to be the number one reason people relapse back to smoking cigarettes after trying to quit.

The National Alliance on Mental Illness reports that approximately 44.3% of all cigarettes are smoked by individuals with a mental health diagnosis, especially those suffering from substance use disorders and schizophrenia.16 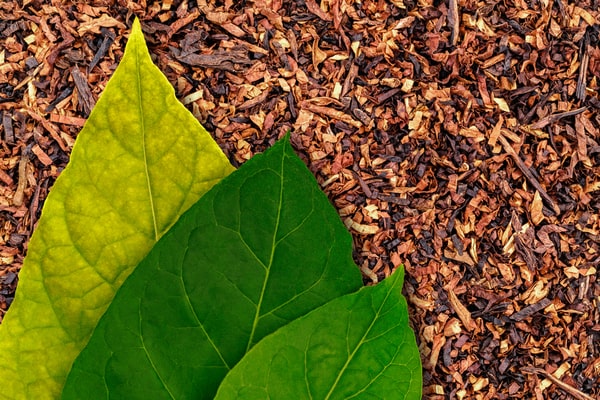 Recent studies reveal that low doses of nicotine act on the brain by causing an inactivation of “high affinity beta2 subunit nicotinic receptors.” In animals and humans, this inactivation appears to reduce anxiety.17

Nicotine also exerts the opposite effect on the brain by improving the mood of depressed individuals. This is why it is considered a stimulant as well as a sedative, because of its activation and inactivation potential.

Nicotine’s active stimulant properties are hypothesized to improve cognition and mood in depressed individuals. Nicotine is a “nicotinic acetylcholine receptor” (nAChR) agonist. In preclinical and preliminary clinical studies, nAChR agonists have been proven to improve depressive behaviors in animals and improve mood in depressed people.18

Nicotine is also thought to improve symptoms of depression by acting on neural networks that contribute to consistent rumination. Instead of obsessing about your internal experience, nicotine nudges the brain to look outward.

In psychology, rumination is defined as the tendency to repetitively think about negative consequences of one’s own experience, such as past mistakes or losses. Ruminating thoughts increase depressed mood and lower self-esteem.

What we think is that nicotine alters cortical network activity and it’s reorienting the activity of certain intrinsic networks in the brain to be more outward looking and less inward looking.19

Wrap Up: The Health Benefits of Nicotine

While it may take many years for nicotine to unravel its reputation from tobacco, medical research is continuing its dive into the potential health of this powerful alkaloid. Nicotine has been shown to help with performance enhancement, such as attention, reaction time, and memory; stopping the cognitive decline from diseases such as Parkinson’s and Alzheimer’s; improving the symptoms of anxiety and depression; and even weight loss.

Nicotine is understood to be addictive even without the presence of tobacco and carcinogens, but in the current medical field, where there is little to be done for those who suffer from cognitive degeneration, lifelong depression and anxiety, or attention issues, nicotine definitely deserves some serious attention. If there’s one thing we’ve learned from the history of medicine, it's that the most amazing cures can often be found in the most unlikely of places.