Jamie Oliver's Food Revolution on the Outs in L.A.

I wrote a month ago about the resistance Jamie Oliver was met with by Los Angeles area schools in permitting the celebrity chef access to school cafeterias for the second season of his Emmy-winning reality television series...

An update this week explained Oliver's battle for access will continue.

In fact the permits for Oliver's show Food Revolution have been revoked following his failure to provide specific proposals for the second season of the series. 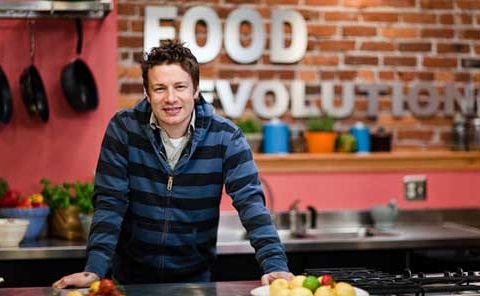 Last week, Oliver spoke at UCLA's School of Public Health, where he told the audience the reason for the permits being revoked was because he could not promise to make the LA school district "look good."

A spokesman for the school district reiterated a statement made in January regarding the lack of interest in involvement with Oliver's program: "You either have to have drama or create conflict to be successful [in a reality television series]. We're not interested in either."

Oliver maintains the premise of his program is not about television entertainment; but rather about a movement toward health and lifestyle.

The show's second season sought not only examine what children are eating in the school cafeteria; but would also include visits by Oliver to families' homes and to Jamie's Kitchen, a space Oliver established in Los Angeles as his kitchen classroom and production set.

Food Revolution piloted last year with the goal of educating American families on nutrition and the dire need for reform in diet and lifestyle.

The show focused mainly on areas that are statistically unhealthy, including one city in West Virginia, where the celebrity chef and health campaigner from the UK started a grassroots campaign in the United States to curb obesity.

Oliver has said of his work and long-term goal: “I wish for your help to create a strong, sustainable movement to educate every child about food, inspire families to cook again and empower people everywhere to fight obesity.”

In 2010, Oliver's work was recognized by the TED Organization, and he was awarded the $100,000 TED Prize for his battle against childhood obesity.

TED Curator Chris Anderson said of the award recipient: "We’re thrilled to award the TED Prize to Jamie Oliver. His work directly tackles one of the most distressing issues the world faces… the obesity epidemic. In this year in which his TV show launches in the United States, we look forward to helping him achieve even greater impact.”

The truth behind Oliver's remarks remains to be seen...

Are the lunch programs in Los Angeles schools hiding something?

And would the "drama" and "conflict" associated with filming be enough to outweigh any benefits the lunch program, the school district, and students and families might receive from involvement in a program like Oliver's?