You won’t find butter, cream, or fry batter in its kitchens…

You’ll be given the choice of agave ketchup for your burger and a variety of dairy-free desserts. 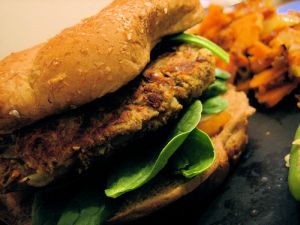 They’ve teamed up with Oprah Winfrey’s former chef Art Smith and vegan chef Tal Ronnen (who designed the diet for Oprah's 21-day vegan cleanse) to introduce healthy food options to consumers who seek both the convenience of fast food and availability of quality, whole food options.

Dubbed “McHealth” by those in the fast food industry, the Chicago-based restaurants will feature vegan, vegetarian, and healthy options for the masses.

LYFE plans to market their menu without the labels of gluten-free, dairy-free, or vegan.

Introducing these options to consumers as options that aren’t marketed as “alternative” or for people with dietary restrictions is part of LYFE’s plan to integrate healthy choices into mainstream lifestyle.

LYFE will debut on the West Coast at the end of this summer, with the first store in Palo Alto, California. The chain has plans to expand to 250 restaurants throughout the United States, including locations in Chicago.

"With two celebrated, taste-making chefs and a talented team of leaders and advisers, we believe LYFE Kitchen is a response to one of America's most significant unmet needs: the consumer's demand for delicious, affordable food that is good for you," Roberts said during a press release.

Philanthropy is at the heart of the company. Roberts explained to Yahoo! Finance LYFE plans to "become a part of the Palo Alto community and begin giving back right away."

Dinner entrees are aimed at the $8-$12 range and will be similar to the latest trend in fast-food dining, the casual dining segment (think: Panera Bread or Baja Fresh).

Read more about the chefs and minds behind LYFE Kitchen's menu, vision, and philsophy here, and be sure to check out Lyfe Kitchen’s website, coming this summer.