Now You Can "Breathe" Your Food

You can consume caffeine in a lot of ways these day. From pills and coffee or energy drinks, to single shots of 5 Hour Energy, you've got plenty of choices. Nowadays, you can get quite a big boost of energy from a very small product.

In recent months, Aeroshot Energy launched in America. Aeroshot is a calorie-free breathable energy product that delivers a unique blend of 100 mg of caffeine and B vitamins through a device resembling a tube of lipstick.

Introduced by Breathable Foods Inc., based in Cambridge, Massachusetts, Aeroshot is one of many innovative ideas from David Edwards, professor of biomedical engineering at Harvard.

A real-life Willy Wonka, Edwards is founder and director of Le Laboratoire in Paris, France: a place where art and design meets science. 'Le Lab' is where ideas can be born, evolve, and be “exhibited” to the public for feedback.

But Edwards didn’t stop with just this idea. After a few too many glasses of wine, at the Bordeaux restaurant of two­ Michelin-starred chef Thierry Marx, he asked “What if you could breathe food?”

He told the DailyMail, “I’d had a few too many glasses of wine and I was nervous about what to do with the laboratory. I asked Thierry if it was possible to eat by breathing. He said yes. It was as simple as pulling the idea from the sky like that.”

Edwards’s first experiment with breathing food was an aerosolized chocolate called Le Whiff. Similar to the Aeroshot contraption, “whiffers” put their lips around the base of the tube and breathe in to fill their mouth with the chocolate powder.

This one-calorie treat is perfect for dieters, allowing them to satisfy their cravings without over-indulging.

“It’s great fun, too,” said Edwards. “Plus, it’s an amuse bouche, a conversation starter. It’s a way of savoring the flavor of alcoholic drinks without getting drunk. Most of all, it’s a way for ­foodies to savor flavors.”

Elaborating on this idea, Edwards created Le Whaf: a fishbowl-looking device that pumps out what looks like clouds of smoke. But it’s not just smoke, it’s tomato soup or a lemon tart, or another delicious dish. 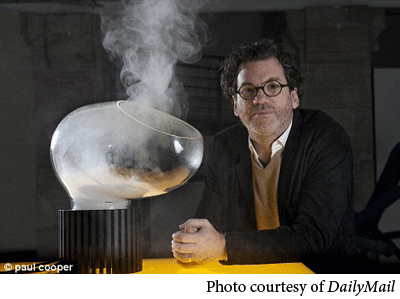 Le Whaf is filled with ­special crystals (piezoelectric ­crystals) that vibrate rapidly when Le Whaf is switched on, thereby creating ultrasound waves. These waves create alternate low and high pressures through the ­liquidized version of the food within it, which makes it bubble and then transform it into tiny liquid droplets that look like a cloud. People can then inhale the “food” through a straw.

Unfortunately, it may be awhile before we see any of these new devices on shelves in American stores.

The FDA isn’t thrilled about accepting the Aeroshot for retail. In a warning letter to Breathable Foods CEO Thomas Hadfield, the FDA said by definition the labeling of the product is false and misleading because the product cannot be intended for both inhalation and ingestion. Stating these two claims contradict each other because the functioning of the epiglottis in the throat keeps the processes of inhaling and swallowing separate.

In response to this, Hadfield issued the statement:

“We plan to work closely with the FDA to meet their requests for information and labeling changes to ensure compliance with dietary supplement requirements. AeroShot delivers a mix of B vitamins and caffeine to the mouth for ingestion and is not 'inhaled' into the lungs. AeroShot is not recommended or marketed to persons under 18 or for use with alcohol."

Although the ever evolving idea man told Good in a recent feature article, that Breathable Foods is “moving away from the breathing language” and toward an idea of “a platform for delivering nutrients and food and drink for ingestion.

The company has changed its name to AeroDesigns and according to Edwards, the shift is a natural evolution.

Edwards envisions that someday a form of his breathable pharmaceutical technology could be used to alleviate iron deficiencies in developing countries, where swallowing harsh iron pills can cause gastrointestinal problems.

“There are some real humanitarian platforms that interest us,” he said. "Right now, though, they’re just ideas.”