The Neurotoxin Lurking in Your Everyday Environment

In the early 1920s, there was a job that carried a higher death rate than a draft card in either of the World Wars...

Both WWI and WWII killed one American for every 40 sent overseas.

But at the Standard Oil Refinery in Bayway, New Jersey in 1924, the death rate was a whopping one in five.

Working there also quite literally drove men insane, and the nondescript brick structure earned the moniker “the looney gas building.” When people brought it up back then, though, it was in hushed tones — a little frightened and more than leery of a factory where so many men went to work and came out changed... if they came out at all.

One worker died babbling and screaming in a strait jacket. Another flew into such a psychotic rage, delirious and hallucinating, that it took four policemen to restrain him. Other employees collapsed, suffered seizures, had memory lapses, didn't recognize their own family and friends, and worse.

And they all had one thing in common...

They had toxic levels of lead in their lungs, brains, and bones.

They were all suffering from lead poisoning. They'd been exposed while manufacturing a new gasoline additive, tetraethyl lead (TEL). Of course, lead was already known to be dangerous. But this new fuel blend made engines run smoother, and the industry ignored common sense in favor of business interests.

At this point, Standard Oil and its partner General Motors had deliberately conducted no research into the health consequences of fabricating and using TEL, and they dismissed credible science on the topic.

In fact, to put an end to the questions and bad press, the General Motors scientist that discovered how TEL positively affects engine performance engaged in a reckless publicity stunt.

Thomas Midgley, Jr. called a press conference and washed his hands in tetraethyl lead in order to wash the industry's hands of the public health crisis.

Given the clear danger, it was a crazy thing to do. Then again, maybe he was crazy. Lead is, after all, a severe neurotoxin, and it was only the year before that Midgley had taken sick leave for lead poisoning. Not surprisingly, not long after his idiotic lead-is-safe demonstration, Midgley had to take a second long leave of absence from work, again because of lead poisoning.

But the leaded gasoline continued flowing...

Between 1924 and 1934 alone, there was a 50% increase in lead levels in street dirt. When lead as a gasoline additive was formally (and finally) banned more than 50 years later, “so much lead had been deposited into soils, streets, building surfaces, that an estimated 68 million children would register toxic levels of lead absorption and some 5,000 American adults would die annually of lead-induced heart disease,” according to Pulitzer Prize-winning journalist and science writer Deborah Blum.

Nowadays, researchers and neuroscientists suggest chronic lead exposure — and the resulting widespread nervous system damage during the leaded gas era — is responsible for everything from a measurable drop in IQ scores to ADHD prevalence to the violent crime rates of the 20th century.1,2

Knowing what we know now, it's hard to believe we're still loading up consumer goods with this noxious substance, but lead is still lurking in some pretty commonplace items and areas:

Though leaded gasoline's been banned in automobiles, a big lead-laden culprit today is aviation. In fact, most private and piston-engine aircraft still use leaded fuel. New research highlights a disturbing trend among children that live outside of airports — they have abnormally high amounts of lead in their systems, especially if they live downwind. Researchers saw the highest concentration in kids who live within a third of a mile of an airport.3

You can see how your own local airport stacks up beginning on page 13 of this EPA document.

There's a toxic kiss epidemic sweeping the nation. Researchers found that women who applied lipstick two or three times per day were ingesting a significant amount of lead — as well as aluminum, cadmium, chromium, and manganese. In fact, in a follow-up study conducted by the FDA in 2012, they detected lead in more than 75% of the 400 popular lipsticks sampled. Here are the top 20 lead-containing lipsticks from that review: 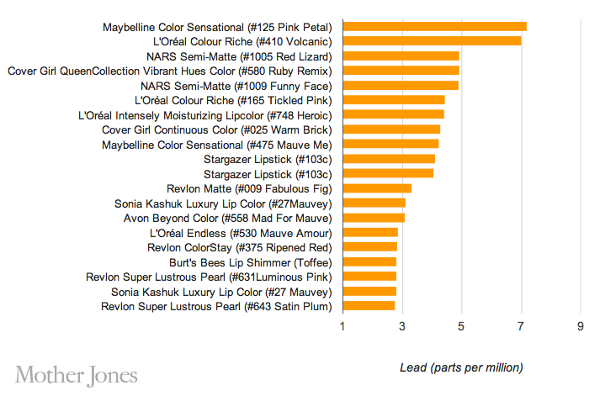 This neurotoxic element has many avenues to sneak into your house, especially if you live in an older home in the city. Old pipes are one of the leading causes of lead poisoning. The newer the pipes, the better, because it wasn't until 2014 that federal law limited the acceptable percentage of lead in pipes to 0.25%.4 Before then, it could be anywhere from 8% on up.5

Lead-based paint is the other biggie that could be lurking in your own home. As with pipes, the older your home, the bigger the chance the paint was made with lead. Toxic hotspots are often found near windows. Over time, the friction of opening and closing the window grinds old paint and creates lead dust. This poisonous dust can be inhaled or worse, ingested by young children crawling around. Your best bet is to replace old windows. Some states even offer subsidies, and the EPA now certifies lead-safe contractors.6

If you're concerned about lead, the good news is that there are simple steps you can take to protect yourself and your family. Some are even simpler than replacing windows...

Here are three easy steps to lead-proof your life:

We've come a long way since 1924, but the sad truth is that you need to be your own best advocate when it comes to getting the lead out of your life. The simple steps above are a good place to start.