Nutritionists and health advocates of the modern day and Western world are known for their focus on obesity. It's the epidemic that is plaguing the United States and a leading cause of many other health issues like diabetes and heart disease.

Many flag exercise as the biggest defender against obesity, including a new study that shows how dangerous inactivity can be. And though regular activity is great for the body in countless ways, a look into more ancient cultures can show us exactly how much diet plays a role.

Scientists from the U.S., Tanzania, and the UK investigated the Hadza tribe in Tanzania to determine how much exercise contributed to metabolism.

What they found was a shock for exercise fanatics.

The Hadza tribe, according to the study published in PloS ONE, represented an ancient culture. The survival techniques of the tribe have changed little in 10,000 years – they still live as hunters and gatherers, using crude tools and no modern technology.

Represented by a population of individuals ranging from 18 to 75 years of age, the Hadza men and women had much greater daily physical activity than the average Western adult. 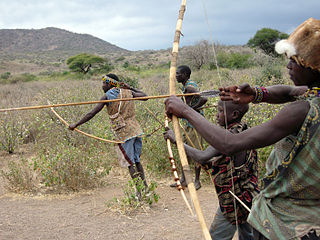 And yet they burned roughly the same number of calories. Their metabolic rates were not much different.

“This to me says that the big reason that Westerners are getting fat is because we eat too much – it's not because we exercise too little,” said Dr. [Herman] Pontzer.

Calorie consumption and the types of food we eat have a lot more to do with the high obesity rates than anything else. The average adult female requires 2,000 calories a day, and the average male requires 2,500. But because of serving sizes and the amount of sugars, fats, and sodium in many of the foods we eat, our daily consumption often exceeds that.

Of course, some have hailed a movement back to the diets of our ancestors as the best thing we can do for our bodies. After all, it's what our bodies were meant to digest.

But advocates of the Paleolithic diet – a.k.a. the caveman diet – might have it all wrong. One form of the diet focuses on eating meat, and lots of it.

Instead, Rob Dunn of the Scientific American believes our digestive systems remain similar to those of our primate ancestors.

Chimpanzees subsist on a diet of fruit, nuts, leaves, and insects. They do eat some bigger meat, but as Dunn says, it only makes up about 3% of their diet. And a good portion of this comes from the insects.

Dunn notes that the activities of more recent ancestors shaped some people's diets. Those with ancestors involved in agriculture may have a better ability to digest starch or dairy, while those with Japanese ancestors are better able to break down seaweed.

Wherever your more recent ancestors were from, or whatever they did, might have an effect on what you are best able to digest.

But for the most part, Dunn says, we are probably best off on the semi-vegetarian diets of our ancestors from long, long ago.

They did, after all, consume considerably less calories than we do now. Just look at the Hadza people.

And the foods they ingested have more fiber and good, natural things than our highly processed foods.

So yes, exercise is very important for our bodies. But perhaps the secret to combating obesity can be found in mimicking the diets of long, long ago.